Home > Our Programs > Networking and Collaboration 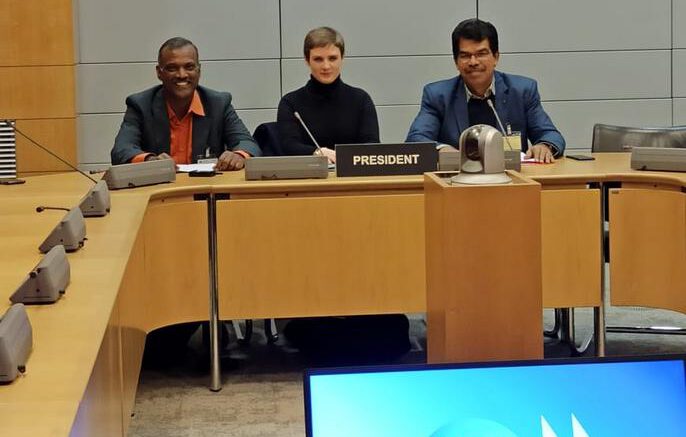 Vaan Muhil has taken active part in all India Working Group meetings held in Kolkotta and in New Delhi for the last three years. Taking part in the national level consultations and meetings, particularly on the Trafficking of Persons Bill gave the partners an overview of the developments that are taking place at national level and to have the feeling of partners’ contributions to the national process in an important legislation that is very much connected to the present work and focus groups. The cross learning and sharing has been really useful to the nature of work in the working villages on eliminating modern forms of bonded labour in Textile Sector. The different strategies worked out in the IWG for the speedy passage of the Trafficking Bill give the partners strength and perspectives in terms of policy advocacy and meaningful engagement with the policy makers at the national level.

6.2. One day Workshops on Labour Code

6.3. One day Orientation on SDGs for all partners

A one day orientation program on SDGs was organized for all partners and other NGOs working for the rights and welfare of the adolescent girls / young women in Madurai and the partners could learn various SDGs, relevant targets and the corresponding global indicators that are evolved by the Inter Agency for SDGs and the national indicators evolved by the Central Govt / Niti Aayog. The participants felt the need for working on certain important SDGs and to focus on areas of interventions specific to working people / target groups. Concrete action plans were worked out to focus on target 8.7 and relevant other targets in goals: 1, 2, 4, 5, and 16. There has been a state level effort going on involving a number of NGOs and academics on SDGs. Vaan Muhil has been part of the state level process on this theme (Labour).

6.4. Meeting MPs in Delhi as part of TNA initiative

As a member of TNA, Vaan Muhil had the opportunity to

be part of the TNA delegation to go to Delhi to meet Tamil Nadu MPs to exert pressure on stopping of the Labour Codes and to get support for the Trafficking of Persons Bill. The TNA team could meet several MPs from different parties in Delhi and took efforts to brief them about the salient features of the Trafficking of Persons Bill, while explaining to them about the negative aspects of the proposed Labour Codes

6.5.. Taking Part in the International Conference on Anti Slavery in Bangkok

Vaan Muhil had the opportunity to take part in the international conference on NGO Alliance 8.7 focusing on human trafficking and modern slavery, held on 3 – 5 December 2018, at Bangkok. Nearly 60 CSOs took active part from 25 countries across the globe and discussed the modalities on strategies to materialize Goal 8.7. All the Indian partners felt the need for a collective effort on the issue and to involve all stakeholders, who are working on this area in India.

As a follow up of the India Working Group meetings on the Trafficking of Persons Bill 2018, Vaan Muhil has been fully engaged in collecting signatures from the people in the working villages in Srivilliputhur and Vembakkottai blocks in Virudhu Nagar district. Vaan Muhil collected 4000 signatures from the community members in working villages and be active part of the Campaign Against Camp Coolie System in the Post Card Campaign and prepared letters to the Rajya Sabha MPs. Nearly 1800 letters were prepared and sent to the Rajaya Sabha MPs from Tamil Nadu.

Vaan Muhil has the special opportunity to take part in t

he UN General Assembly Week program held in September 2019. The director spoke in a special event organized by The Freedom Fund to highlight the effectiveness of community based interventions in South Indian Hotspot to reduce the socio economic vulnerabilities of the bonded labourers particularly working adolescent girls in Textile sector.

6.8. Participation in OECD Conference in Paris in February 2020

The director of the organization had the opportunity to be part of the two member team, representing Tamil Nadu Alliance in the three day OECD conference in mid February in Paris. The team members had changes to interact with international NGOs and governmental agencies during the conference and released the Tamil Nadu Declaration, seeking for commitments from the brands sourcing from the state.